Persistent genital arousal disorder was first described by Leiblum and Nathan in 2001 and was initially called Persistent Sexual Arousal Syndrome (PSAS). (1) The name was changed to PGAD in 2006 because the condition was due to a genital arousal problem rather than a sexual arousal problem. Genitopelvic Dysesthesia (GPD) was added to the diagnosis (PGAD/GPD) in 2019 to incorporate the unpleasant and atypical sensations like pain which also occur with this condition. (2)

Persistent genital arousal disorder/genitopelvic dysesthesia (PGAD/GPD) is an uncommonly reported women’s sexual health concern. It is characterized by unwanted and distressing genital sensations of arousal, pain/discomfort, and/or being on the verge of orgasm or having uncontrollable orgasms.  Symptoms are not associated with any type of sexual activity or thoughts, and the sensations can lead to ongoing physical pain, emotional distress, and difficulty carrying out everyday activities.

Persistent genital arousal disorder is often associated with significant negative impact on those who suffer with this condition. Women with PGAD/GPD frequently experience depression, anxiety, and other negative emotions.  Women often have difficulties with relationships, sexual satisfaction, and overall well-being. They also frequently have suicidal thoughts because the condition is so distressing. (3)

PGAD/GPD is associated with persistent or recurrent, unwanted, intrusive, distressing sensations of genital arousal. This may include spontaneous sensations such as pressure or discomfort, engorgement, pulsating, buzzing, pounding and/or throbbing in the genital tissues such as the clitoris, labia, vagina, perineum, and/or anus. Symptoms may also include being on the verge of orgasm, experiencing uncontrollable orgasms, and/or having an excessive number or orgasms. These sensations are not associated with sexual interest, thoughts, or fantasies. Masturbation and orgasms offer little or no relief. Women who have PGAD/GPD commonly experience anxiety, depression, insomnia, irritability, alienation, feelings of hopelessness, and thoughts of suicide. (2)

Specific causes of persistent genital arousal disorder/genitopelvic dysesthesia are not fully understood, and medical research indicates that many different triggers may result in PGAD/GPD symptoms. It appears that a complex combination of biological, psychological, and social factors contribute to the development and maintenance of the condition.  Some of the biological/physical factors include abnormalities with the nervous system (brain, spinal cord, and nerves) or vascular system (blood vessels).  Medications, hormones, and pelvic floor muscle problems can also trigger PGAD/GPD symptoms. (2)

Various triggers that contribute to PGAD can be categorized into five separate regions of the body:

In addition, psychological and social factors can affect how the brain perceives and interprets the abnormal genital sensation. Women with PGAD/GPD commonly experience mental health difficulties such as depression, anxiety, panic attacks, and certain obsessive-compulsive symptoms. (3) Anxiety may reinforce, increase, and maintain PGAD. Many women report that stress worsens PGAD/GPD symptoms, whereas distraction and relaxation strategies lessen the symptoms.

PGAD/GPD can affect both men and women of all ages.  Studies have shown that the incidence of PGAD/GPD ranges from 0.6% to 3% in women.  The average age of developing symptoms is 37 years old, and can range from age 6 to 66. Symptoms started prior to age 18 in 25% of women. (5)

Treatment is often tailored to manage the underlying condition or region felt to be causing  unwanted symptoms.  Generalized treatment measures may include psychological-based treatments (cognitive behavioral therapy), management of depression with medications, or focus on efforts to maximize relaxation through strategies such as distraction and/or hypnosis. (2)

Treatment options are often based on the affected region and are determined by underlying factors.  Management may include the following:

Each woman suffering with PGAD/GPD needs to be thoroughly evaluated to try to determine the specific trigger causing the unwanted and distressing symptoms.  Treatment should then be individualized for each person and take into account the biological, psychological and social factors that play a role in this complex and distressing condition.

There are support groups on social media platforms for women who experience PGAD/GPD. 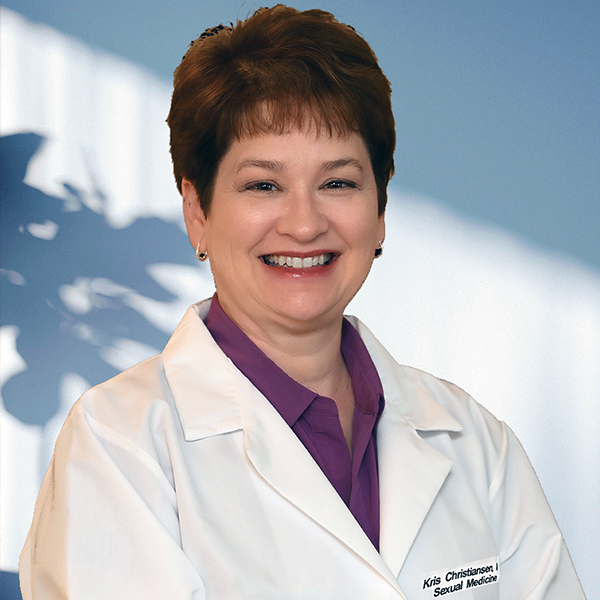 Dr. Kris Christiansen a board certified family physician who specializes in sexual medicine. She attended medical school and completed her residency in family medicine at the University of Minnesota Medical School. After practicing full spectrum family medicine for 10 years, she was drawn to the field of sexual medicine and pursued additional training to be able to provide the care for her patients that is so difficult to find.

Pelvic floor muscles are thin layers of muscle that form a basket to support pelvic organs and their dysfunction can lead to pain disorders or problems with bladder, bowel and sexual functions.

Dyspareunia is a general term for pain with penetration during intimate sexual contact (fingers, toy, penis). Deep pelvic pain, or deep dyspareunia, usually emerges because of other existing disorders deep in the pelvis adjacent to or touching the deeper portions of the vagina.

Have an issue that you want more clarification on? Request our contributors to write about it